What happens when you find yourself with 5 apples and 2 pears peeled and sliced, the cornstarch, sugar, and nutmeg all measured and mixed and you can’t find the cinnamon?  ( I know you are supposed to check for all supplies before starting, but I’m just not good at that, period.)  Once I pulled my head out of my spice/baking cupboard and stopped sneezing, I asked myself ….How can I make an apple pie without cinnamon?  And when did I run out of cinnamon?  Oh yeah…I made 50 pie crust cinnamon rolls yesterday using my last of the spice.  Beagles!  Crap or well I think I said another four letter expletive, but ah well.  After I gathered myself and figured I’d still eat it even if it was lacking something (I like pie that much) I found a container of ground ginger and figured why not ? So in went some ginger.  I am happy to say I am not missing the cinnamon! 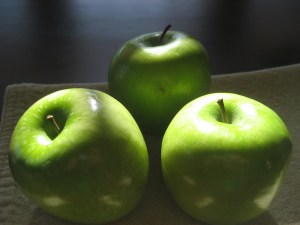 If you read my previous blog post (Pie Crust Take 2), I mentioned that I would probably not use the crust containing lard for sweet pies, but when you find yourself with 3 rounds of the dough in the fridge from a previous experiment, a supply of apples and pears,  and you were raised not to waste food, you use the dough and deal.  I mean its still going to be good and trust me it is wonderful.  The sweetness of the pie filling in combination with the almost salty ( I can’t find a word to describe its flavor yet) pie crust…its a nice contrast.  This is not to say that I won’t or don’t like sugar in my crusts, this was just a nice surprise. 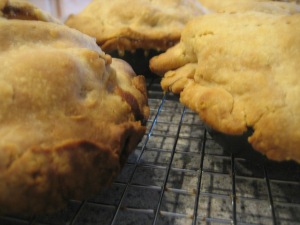 I did not make one large pie because its just me and I shouldn’t eat a whole pie.  I made 4 small individual pies and plan on freezing them until I have a hankering for pie.  I had a little bit of filling leftover that wouldn’t fit into the pie plates, so I just threw them into a pyrex bowl and baked along with the pies until the apples were soft and juices were bubbly and clear.  I am saving those for a midnight snack.

Pie Crust *was able to make 4, 5 inch pies with double crust with a little left over – be ready to make some pies with this recipe!

I have no pics of pie assembly…completely forgot to do so!  Oops!

This pie is pretty flipping good if I may say so.  I love when I think something is going to be a flop turns out to be lovely.  Ginger was a nice touch adding a nice spiceness that complimented the pears and apples quite well.  These pies never made it the freezer … I pawned them off onto the gals at work.