Yesterday or the day before, anyway it was a Monday and it happened to be my first night back to work when I decided to start an experiment.  You can read about this undertaking in the previous blog, but to cut to the point, I am in search of a great pie crust and to set my mind at ease. I understand that pie crust is not something that is on most peoples minds, but for this gal it is.  Maybe it is because once you have a great pie crust, it is forever imprinted on one’s mind.  I want that imprint to be my pie crust.  Also, how can I have a food blog without knowing what pie crust I prefer and what the differences are between the many varieties.  Through my baking journey I have tried many a pie crust recipes, but I have never put them head to head and truly examined the differences.  That is until now…

I spent 5 + hours in my kitchen last night before work kicking out pie crusts.  How many do you ask?  I narrowed it down to 5 different crust recipes to test.  After nearly a sack of flour, a tub of lard and vegetable shortening, and a pound of butter I think I have narrowed my favorite down to 2 or was it 3?

Before I reveal which crusts I found to be the best and most satisfying to my tastebuds (and fellow taste testers), I should present what recipes I experimented with and the end result of each (pros vs. cons if you will).   The criteria most look for in a pie crust once baked are: flakiness, tenderness, lightness, firmness, and crispiness. Oy vey-ness!  Now The Joy of Cooking cookbook describes (for about 15 pages) the differences between each of the fats and what to expect, but I needed to see and taste the differences for myself.

In choosing which recipes to try, I went with the most popular combinations of flour to fat (vegetable shortening, butter, and or lard).  Man, I wish lard had a different name.  I guess if thats the least of my worries…

I did not make 5 pies last night, that would have been insane!  Instead I made pie crust cinnamon rolls.   These are so good that they deserve their own blog post.  Mmm…a little taste of childhood.

So here we go…

*I used a food processor to make all crusts, but if you do not own one the same end result can be reached with a pastry blender or 2 knives to cut the fat into the flour and then use a fork to mix in the water.  Again The Joy of Cooking has an entire section devoted to pie crust and all that it entales.

Directions for all recipes unless otherwise noted are as follows:   Mix dry ingredients together, cut in the fat (vegetable shortening, lard, and or butter) until one has pea sized pieces throughout, and then slowly add the water one tablespoonful at a time mixing with a fork or food processor until the dough can be formed into a ball.  Cover dough with plastic wrap and refrigerate for at least 30 minutes before rolling out.  Do not over work dough!!!

Recipe #1 ( Vegetable Shortening) ; this is also my mom’s go to recipe, which she borrowed from Betty Crocker

Results:  This recipe is very good and nearly made the final cut. This crust is light, flaky, and crispy, but what it has in texture it lacks in flavor.  It has a very neutral flavor, nothing too exciting.  So on to the next…

Recipe #2 (Butter); This recipe is a popular one as well, as I found similiar recipes in both The Joy of Cooking and Mastering the Art of French Cooking (MAofFC).  The proportions are as follows : 5 parts flour to 4 parts butter. (I like using weight when possible – much more accurate)

Results: This dough was tasty and quite tender!  It was flaky but not as flaky as recipe #1 nor was it crispy.  The dough was much softer and delicate.  It did not hold its form when baking – puffed up, one might say.  I would not use this dough if the goal was to have an exact edge.  It was a favorite among a few testers.  And on we go!

Recipe #3 (Lard) ; I am trying this one because before vegetable shortening, women used lard and some of the best pies (so I have heard) come from a lard crust.  If you think that lard is bad for your health, you are right it is, but if you are eating pie then how concerned are you?  At least in the present moment…

The Joy of Cooking – or as I now refer to it as, the pie crust bible, recommends using leaf lard (fat around pig kidneys – eck!), which my local grocer did not have (they said it was hard to find) I opted for lard from random parts of the pig – double eck!  Random lard has a more pronounced flavor – for now I have to take their word for it …

Results:  This recipe, as is, is a top favorite (along with #4) but would use it for savory dishes (possible stronger flavor of the lard).  For example chicken pot pie.  I believe if sugar was added to this recipe then it would be great for sweet treats as well.  I think I might have to give this one another shot, just tweaked a bit.  I found this one to be flaky, tender, crispy/crunchy, and the flavor a bit savory rather than sweet.

This recipe was new to me, but as I was discussing this experiement with others it came up as the recipe of choice with many.  Learn something new every day.  This recipe makes 4,  9 inch pie crusts, the other recipes make a single 9 inch crust.  The quantity of dough makes it difficult to make in a food processor and I didn’t try to cut the recipe in half…how much is 1/2 of an egg???

Mix dry ingredients.  Cut in the lard.  In a small bowl mix water, egg, and distilled white vinegar.  Add wet ingredients to the lard/dry ingredients combo and either pulse with food processor or mix with a fork, until it can be formed into a ball and chill for at least 30 minutes before rolling out.

Results: This recipe was quite similiar to #3 in flavor.  The texture seemed to be stepped up a bit.  Light, flaky, crunchy/crisp, tender…it just seemed to disperse evenly in my mouth, but it still was firm and sturdy.  Hard to explain in words…just give the recipe a try!   I am going to try this recipe with sugar added for sweet treats, but leave it as is for savory dishes.  I also received a similiar recipe from my cousins where vegetable shortening (1 + 3/4 Cup)was used along with sugar.  The possibilities seem endless 🙂

This recipe is hands down an all time favorite for everyone from Julia Childs in MAofFC to Ina Garten and Alton Brown.  I have used this recipe many a time and it has always been a favorite of mine as well…I like having things in common with those mentioned above!  Proportions is as follows: 5 parts flour, 3 parts butter, 1 part vegetable shortening.

Mix dry ingredients.  Cut in butter and then cut in shortening, then continue on as usual.

Results:  Winner, winner chicken dinner! It showcases the best of what vegetable shortening and butter have to offer.  It meets all criteria of taste and texture.

Final outcome is that I would gladly use recipes 3 – 5.  I have a few more tests for the lard containing crusts, but they are just tweeks on the sweetness.  Savory dishes I would pick recipe 3 or 4 and for sweet treats I would use recipe #5.  You can take my word for it or do what I did and bake away!

For those of you out there who are saying that there are many other kinds of crusts besides the ones I profiled and you would be correct!  For example the use of cream cheese or corn meal, or the graham cracker crust … but I believe these have distinct uses for specific pies and therefore will be left to their own doings (at this time).

If you reach this line … you are amazing and probably my mom.  Thank you though for allowing me to have an outlet and a reason to talk about pie crusts for 1500 words.  (pictures and posts of actual pies to follow soon ) 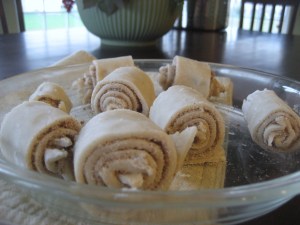